In the south of Germany lies Freiburg im Breisgau, a city that hosts many different sustainable projects for humans, culture and the environment. It is an inspiring place, filled with great spirit and therefore what we as Funkenwerkstatt call our home: From here we want to establish our sustainable network and connect people.
No matter if exploring the partly car-free district of Vauban or communities such as the Grether area, Freiburg`s people are just like the city, open and inviting and fully committed to actively shaping the place. Thus, it was not a surprise that when we were in search of a repair cafe in the Grether area, we encountered a special place called Strandcafe. There we came in touch with the team of zusammen leben e.V., and immediately, we realized that this is an ideal starting point for our magazine. Zusammen leben e.V. is an initiative that aims at connecting people of different ethical backgrounds, cultures and lives by offering a welcoming space to them. Through diverse projects and a wide range of programs, visitors are introduced to a culture of sharing and living together. The association’s basic principles are the three aspects of social, cultural and a more sustainable understanding of each other. 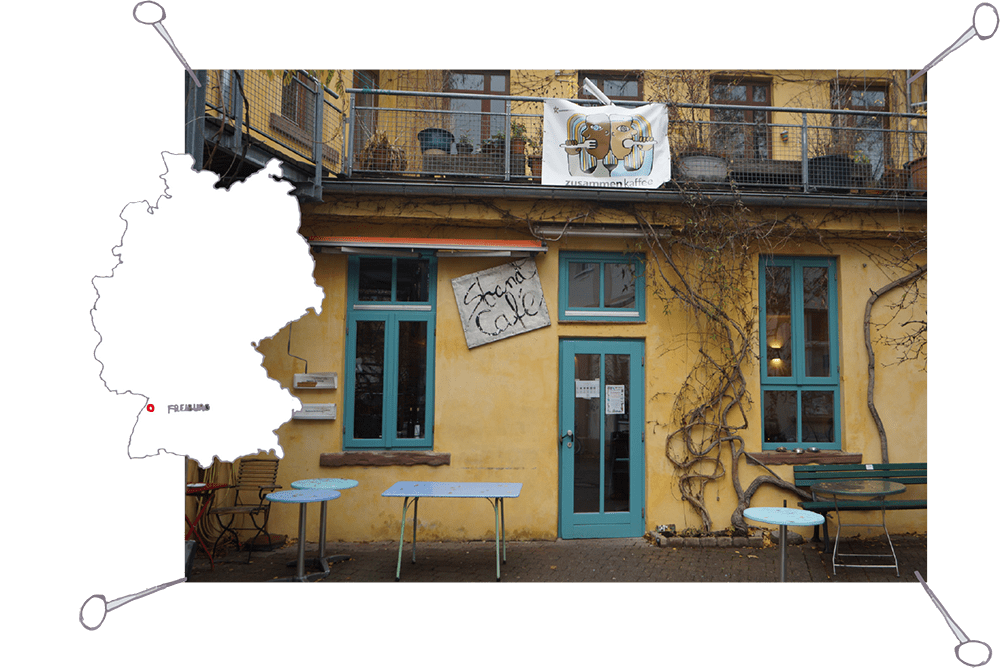 This concept is realized through the threefold projects: zusammen Kaffee, zusammen kultur and zusammen garten.
Everyone is welcome in the „zusammen Kaffee“, which opens its doors at the Strandcafe in the Grether area from Tuesday to Thursday. It is a cafe that is entirely based on donations, an idea that originated by the „Caffè sospeso“. In addition, it invests its profits in free food for those in need. But not only is it truly collective and social because of its financial approach, also the integrative concept is extraordinary: The cafe involves people from all over the world in the cooking process, and thus obtains various meals from different parts of the world, leading to an outstanding culinary delight. Additionally, group tables in the interior invite visitors to start chatting. Hence, a space is created in which people can communicate regardless of their background and get connected. „It builds equality and allows us all to sit around a table, share meals together.

It is an integrative approach that I find very beautiful. I am already excited whom I will get to know and talk to in the upcoming weeks“, explains Hannah, a young student from Freiburg we addressed at the café.
What someone pays for the meal is at his or her own discretion. A donation of just 5€ for example covers the entire costs for the dish. Everything that is paid in addition, is spent on a free meal. Dishes vary moreover on a daily basis. Tuesdays for instance, Syrian food is served and Wednesdays are aligned to the Vietnamese cuisine. People from the respective countries then prepare the traditional meals. These are often refugees who then receive the possibility to share some of the culture and heritage they had to leave behind.The ingredients 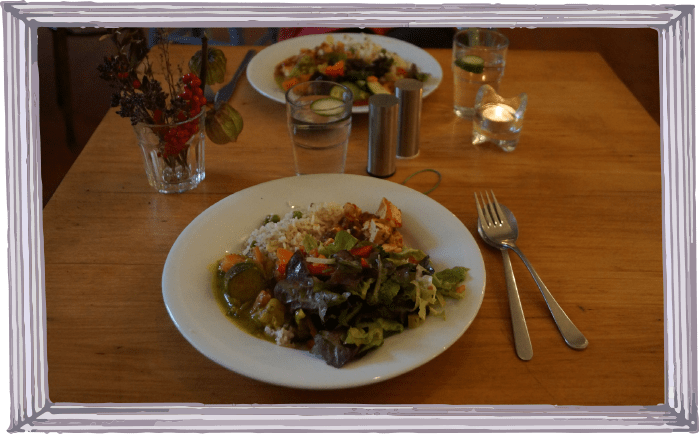 used in the dishes are all organic and locally sourced, with exceptions for exotic ingredients due to a lack of availability. In addition to the culinary offer, the cafe also invites to a series of cultural events in order to further expand and promote the exchange of culture and people.
„This place should be like a journey without movement, where people can come in contact with each other over different tastes, music and ideas.“ shares Leo, co-founder of zusammen leben e.V. and bartender in the cafe her vision.

How can someone actively participate in the lives and access the stories of people from other countries? According to zusammen leben e.V., a big step is the cultural understanding of the countries of origins of everyone in the community. Therefore, collaborative mediums like „singing together“ and „together onstage“ are offered. Folk instruments and songs that provide a sense of cultural origins of the musicians are then being played, giving an idea of the diversity of the world. Hence, people can share their stories and establish an exchange over ideas and life events at zusammen Kafee. 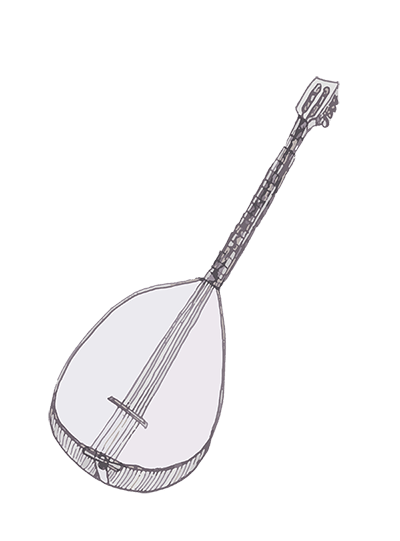 The open stage invites everyone to get in contact with new culture and people, bring their own instruments and express their stories. These stories are additionally translated in the respective languages, so that not only contents are transmitted, but also as authentic as possible the feelings and emotions from the countries.

At the village brook in the Vauban district, the zusammen garten is located. Since July 2016, many small ideas have come together on a plot with an area of approx. 3500 square meters. The garden is mainly divided into two large sections: The first section consists of small garden plots, which are arranged crescent-shaped. This part of the garden is used privately. Anyone who would like to participate in the project can plant and design his/her own plot here. Whatever the plot in the end throws off can then be kept for personal use. The second large section of the garden consists of a communal garden, which is also groomed and peeled collectively. Unlike the individual parcels, the harvested vegetables are also used for joint cooking events or for „zusammen Kaffee‘s“ joint table.

If one follows the gravel paths that surround the beds, he/she comes across an herb snail: A twisted herb bed that spirals upwards just like snail shell. Due to the different heights and positions of the herbs, an optimal light supply of the different plants is taken into account. Herbs that require a lot of light are at the top of the spiral, for example thyme. Another advantage of the herbal snail is that different plant species, which actually prefer different locations due to differences in soil, can thus be grown on the same area. Along the way you pass a fireplace that invites you to join in the cooking. The fireplace is the central point in the garden and is connected to the „Geodome“.
The term „geodome“ refers to a geodesic dome fully covered with transparent foil. Through the translucent foil, the „geodome“ warms up inside, so that the construct works just like a greenhouse.

Its spherical and triangular struts design is very stable against weather and earthquakes. The construction also ensures better air circulation and sound distribution compared to conventional greenhouses. In addition, the „Geodome“ is used for events in the evening as it heats up quickly and stores the heat. 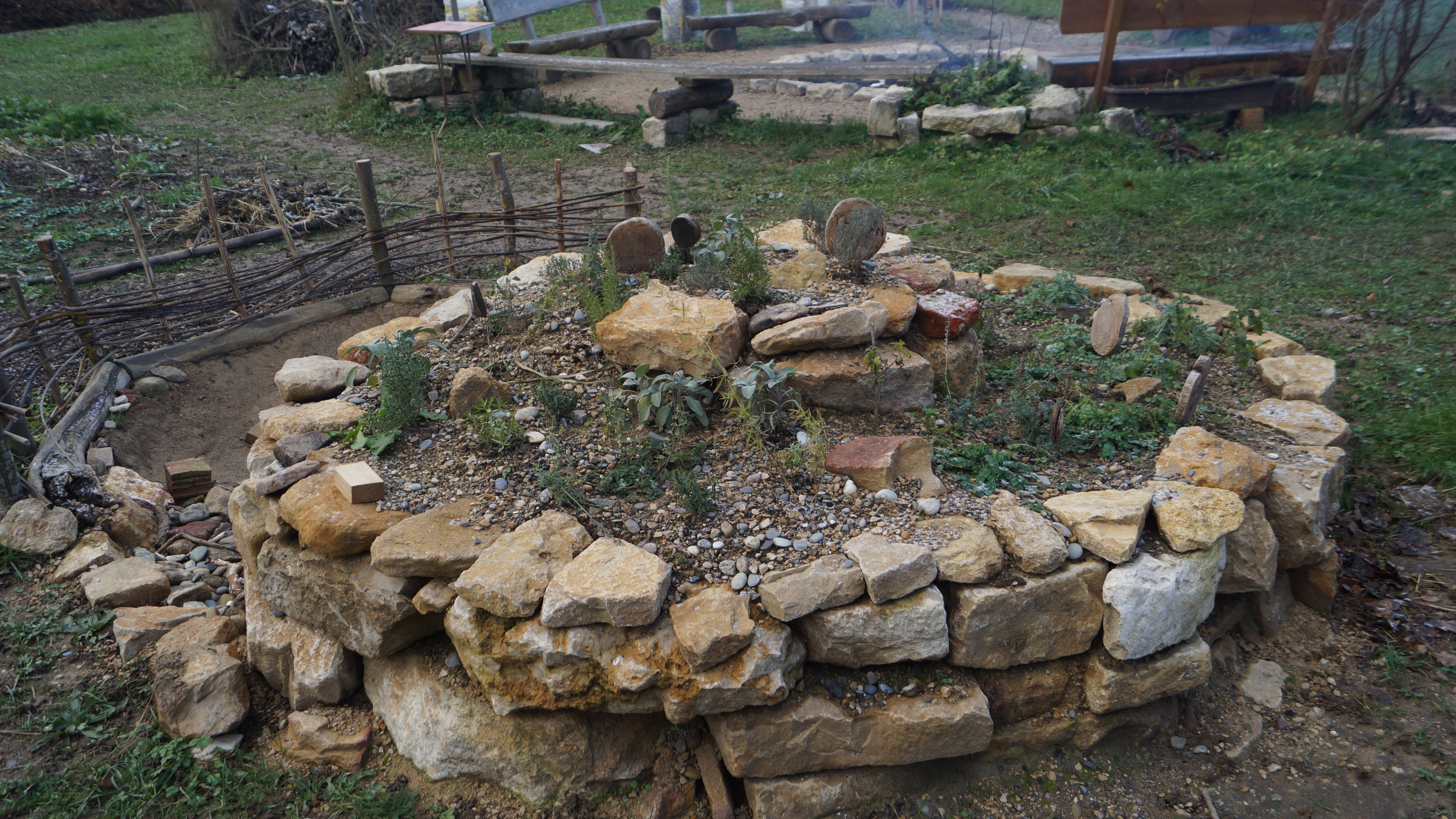 The herb snail in the garden, planted with thyme and co. 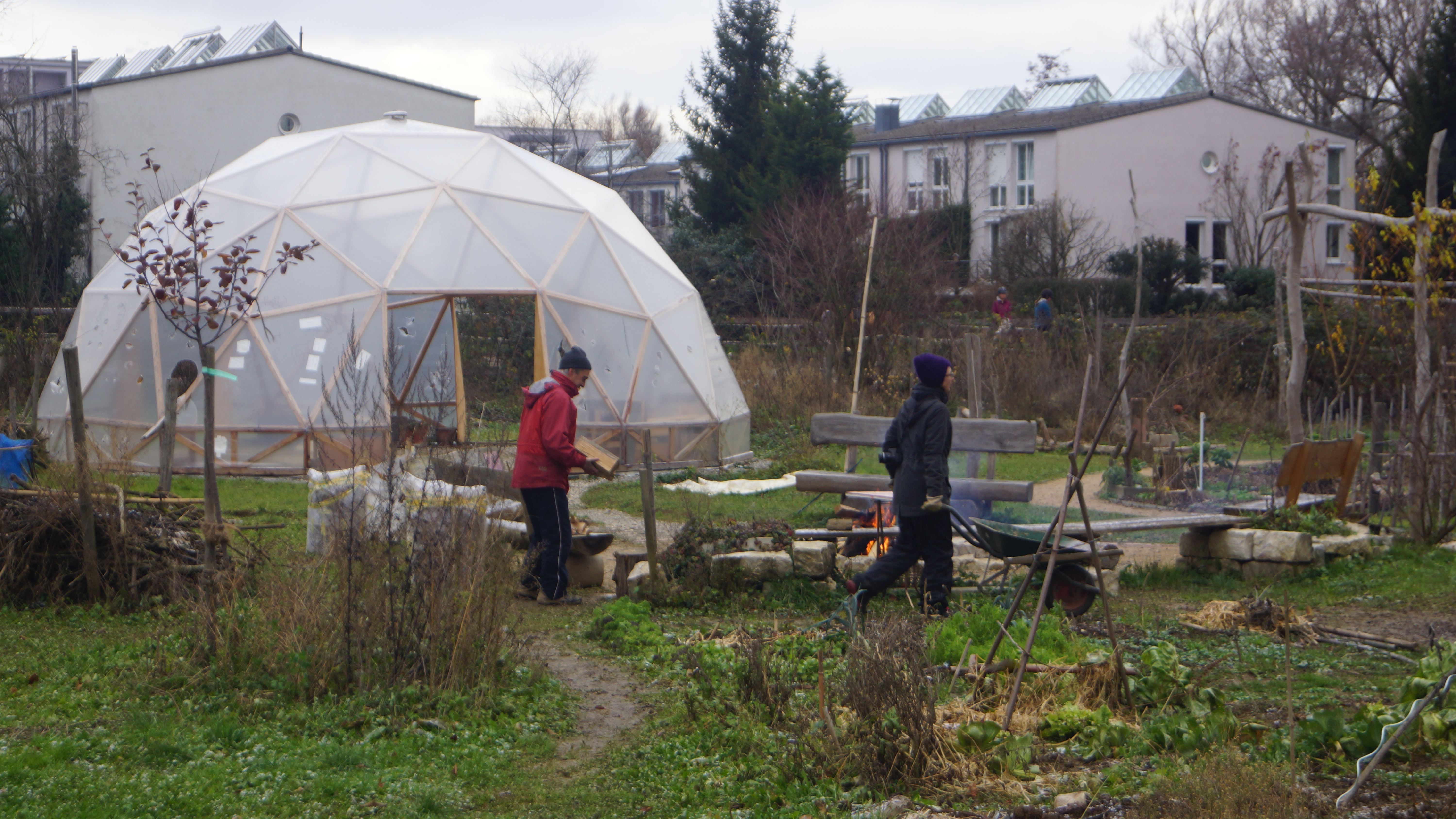 Insights in the garden: Some common areas are displayed in the foreground, the „Geodome“ can be seen in the background.

Schematic representation from the utilization of excremental products up to its reuse as nutrient for plants.

In zusammen garten, a humus toilet is currently under construction, which is jointly designed and built by the society. The „humus toilet“ is barrier-free so that even wheelchair users have access to the toilet via a ramp. Excrements are then separated: The urine migrates into an external container and can be tapped off there with a pouring can as an extra phosphate dispenser for peas. In turn, the feces are composted and used as a nutrient basis for plants. This actively creates a cycle between man and nature.

Another project in the garden is a separate mushroom breed. Nutrient and suitable for mushroom breed are mainly hardwood species such as beech and oak. However, mushroom growing is also possible with fruit and natural woods. Mainly oyster mushrooms and herb saplings as well as chestnut mushrooms are harvested. The cultivation is carried out by means of biological injections, which are used in a suitable tree trunk. Depending on the type of fungus, the first fungi develop in early or late autumn depending on the external conditions.

Together with its three aspects, „zusammen Kaffee“, „zusammen kultur“ and „zusammen garten“, zusammen leben e.V. combines all the topics that we as Funkenwerkstatt tried to highlight in our categories “Humans“, „Culture“ and „Nature“. Hence, zusammen leben e.V. shows that in an association, the combination of these three topics is possible! We thank the whole association for the interesting exchange, the joint work and the opportunity to present our first article of Funkenwerkstatt about them. 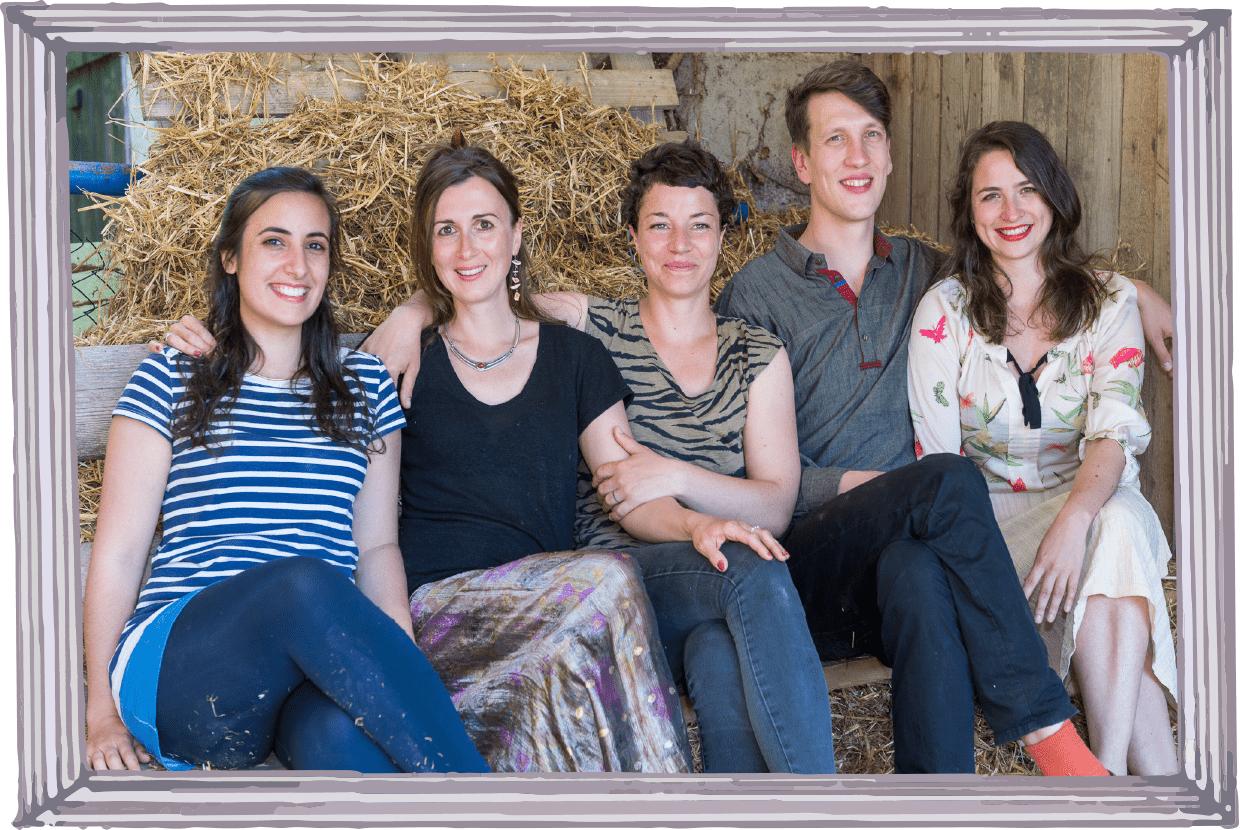 Zusammen leben e.V. is an initiative that aims at connecting people by its three projects zusammen garten, zusammen kaffee and zusammen kultur…

The Little Prince Academy is a unique non governmental project in Turkey and very important for its special visitors, made for local disabled people it is a prime example for the general societal topic of inclusion in Turkey…